The Power of Advertising

It’s that time of year where the weather turns crisp, the leaves change to rich colors of orange and red, and the pumpkin spice latte craze begins. What’s the first thing that pops into your head when you hear “pumpkin spice latte”? For me, I immediately think of Starbucks and the cozy feeling I get when entering one of their coffeehouses. This is largely associated with the ambiance Starbucks wants to convey storefront and the power of their advertising. Thus, my brand loyalty is being created.

Companies like Starbucks have spent a lot of time and money on advertising to create an experience and feeling for their consumer to identify with. Now, two questions have to be asked: How does a certain brand create a powerful pull to their products to attract customers over their competitors? And, how does this relate to a Pumpkin Spice Latte?

The main way of generating brand loyalty is through powerful and effective advertising and marketing campaigns. Consumers are drawn to advertisements they feel a connection to. A good advertisement gives the perception that we have a specific need before we actually do.

Let’s look at a few coffee companies’ advertising slogans; Dunkin Donuts’ is “American Runs on Dunkin”, McDonalds’ is “I’m Lovin’ It”, and Panera’s is “Live Consciously. Eat Deliciously.” Starbucks interestingly does not have a slogan, but they take the time to personalize each individual coffee with your own name. All of these efforts take the consumer and their needs into consideration, and promote themselves in a way that becomes part of the consumers’ daily routine of everyday life.

Another crucial aspect of a powerful advertisement is its relevancy to the intended target audience. Because these companies are large, multi-million franchises, they have the means to extend advertisements to all platforms such as social media, television ads, and print media to name a few. In today’s market, the ability to connect and communicate with an audience through social media is a predominant method for engaging current and new customers. Timely feedback between consumer and supplier allows the purchaser to put a face to the name thus creating trust and a relationship between the two. Starbucks and Dunkin Donuts are experts at this – they effectively implement online communication with customers through questionnaires asking them what they want in a quality brew and ways to vote to bring back a product by popular demand. All of these efforts generate a relationship between the consumer and the supplier, which creates brand loyalty. 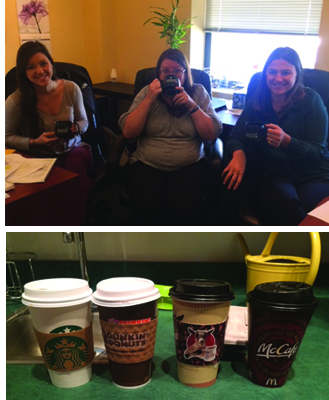 An avid coffee drinker will go to the ends of the earth to defend their brew, but is this because the coffee is that good, or have they become increasingly brand loyal over time? To answer this question, we put our employees to the test to see if they could stand by their brand. Over my lunch break I picked up four pumpkin spice lattes from four different locations. We decided to test Starbucks, Dunkin Donuts, McDonald’s, and Crazy Mocha. To make sure that the employees were unbiased, we conducted a blind taste testing. They each tasted the unidentified latte and tried to guess which company the pumpkin-y goodness came from. They all loved having a taste of the praised pumpkin spice latte, but were they able to identify their beloved brand?

The results showed that some people are focused on their brand loyalty, while others can’t be fooled. TMI President, Taylor, and our Art Director, Kerri, proved to be pumpkin spice latte connoisseurs. Both of them were able to correctly identify where each latte came from, earning a perfect 100%. They were able to see past the brand and focus on the common tastes that each company offers. On the other hand, our Manager of Marketing Services, Sydney, and Ali, our Marketing Development Manger had a hard time picking and choosing where the latte’s belonged. Sydney loves her Starbucks, but when it came to the blind taste test, she identified McDonald’s pumpkin spice latte, as her favorite brew. She actually loved how it tasted and asked to drink the rest of it after the test. Later, when the results were revealed she couldn’t believe that she had chosen McDonalds sugary goodness over the others. Here, Sydney saw the impact of her brand loyalty to Starbucks and how much their personalized coffee creations impact her desire to buy from them on a daily basis.

Ali was also able to guess two out of the four correctly, identifying Starbucks and Crazy Mocha on the first try, noting that she deciphered each latte by how she thought the company would make them. Interestingly enough, the only latte that all four employees guessed correctly was the latte from Crazy Mocha – a Pittsburgh originated company.  This shows that Crazy Mocha’s brand and taste are consistent on all measures, giving their consumers a consistent experience.

Our test clearly identified how we are more likely to enjoy something just because the logo and labels are there. When the brand, service, and total experience are removed, it’s much harder to tell where something belongs. It’s an obvious thing to say “how you market your product, can be the do or die moment for your company,” however, even as a consumer in the industry itself, we tend to forget how crucial it is to know your customer and what they want out of their overall purchasing experience. So when the thought of a pumpkin spice latte comes to mind, what do you think of?